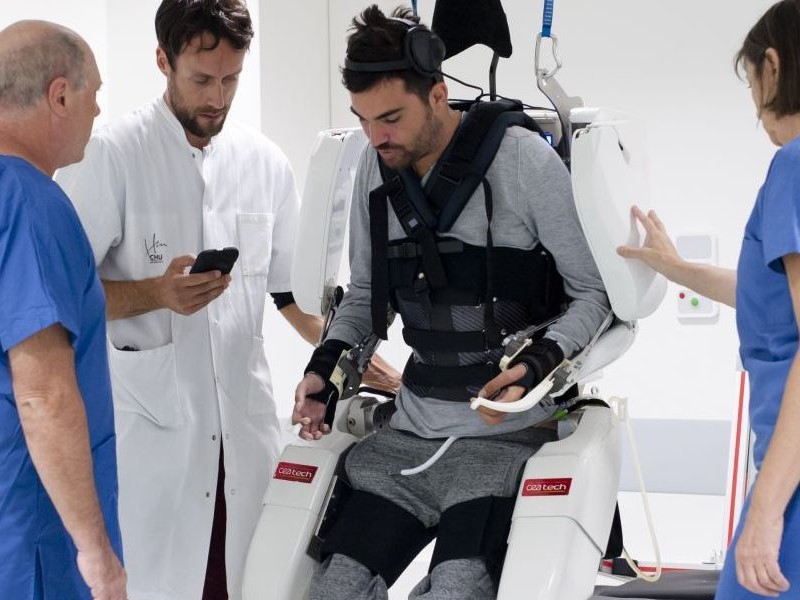 The group of French scientists has developed a brain-machine interface algorithm allowing the paralyzed man to move using the exoskeleton.

The operational concept of the innovative solution is the following: two sensor modules of the brain-machine interface are attached to a human head. Each one is connected with 64 electrodes. They are implanted into a braincase. Conductors record brain electric signals. The adaptive algorithm processes these signals in a real-time mode and deciphers a direction of desired motions. Data is transferred to the exoskeleton control system.

The solution efficiency was checked as part of the practical experiment. It involved the 28-year-old Frenchman who became almost totally paralyzed because of trauma. Electrodes were connected to his brain areas controlling body movements. Afterwards, he has been trained for two years. The training looked like a computer game. The volunteer had to control the virtual avatar using brain electric signals.

During the practical part of the research, the exoskeleton was attached to the man’s body. To provide its security, the device was integrated with the mechanism preventing it from falling.

As a result, the Frenchman could take 480 steps using the exoskeleton. He overcame 145 meters in total.

The experiment will keep going. Scientists believe that this technology will allow disabled patients to control wheelchairs on their own due to brain activity.