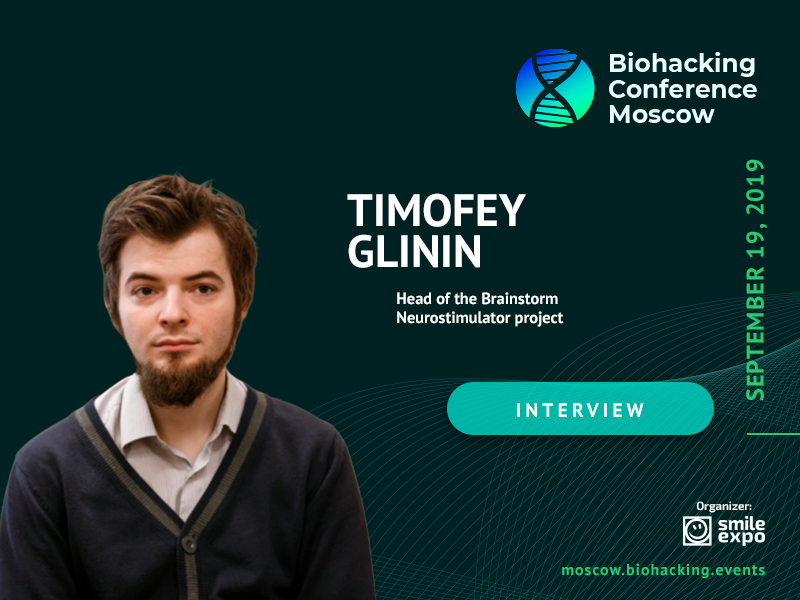 Brain electric stimulation using the TDCS method, features of Brainstorm Neurostimulator, and development of a new ergonomic device for athletes are revealed by Timofey Glinin in an interview with Biohacking Conference Moscow.

ВСМ: How did you come up with the idea of Brainstorm Neurostimulator development?

T.G.: The idea of developing the neurostimulator was caused by my research paper. I studied various ways of aged pathology therapies. One of the methods was cranial electrotherapy stimulation used to recover cognitive functions of older people. It allows improving the memory and the speed of their responses. Back then, I was intrigued by this technology.

The most interesting was the fact that the same effects from electric stimulation could be seen among healthy adult persons and a lot of brain functions could be stimulated as well. There are numerous scientific studies dedicated to this issue. Besides, brain stimulation gadgets are already coming into general use worldwide. Therefore, I decided to join this trend.

ВСМ: What is the operational concept of the neurostimulator?

T.G.: Neurons in our head are structured in different zones. Some brain areas account for motion coordination, fast response to processes, and speech functions. Each one is placed in a certain area in healthy people.

Weak micro-currents can slightly activate neuron operations, as they are also based on electricity. These cells transfer the signal across certain structures electrically. Weak permanent current can help neurons to perform their functions. Stimulation of required head areas during different affairs appears to be efficient in order to improve the accomplishment of necessary functions. Besides, the result is noticed not only during the procedure but also in the long run after the course.

The application of the neurostimulator activates brain flexibility mechanisms, which provides a positive effect. If the brain should conduct some tasks constantly and routinely, it rapidly strengthens neuron ties in this area, remembers what it has to do, and starts operating more fruitfully even after the completion of such a training exposure course.

ВСМ: How often should one use the neurostimulator? And how long should be each procedure in order to gain the maximum effect?

T.G.: We have devoted plenty of time to prepare the neurostimulator guide that would comply with scientific experiments showing the efficiency of transcranial direct current stimulation technology (TDCS).

In general, one session along with training of the corresponding brain function should last approximately 20 minutes. The procedure should be carried out once per day within 5-10 days. This course exposure allows the brain to train itself in fulfilling the necessary function.

ВСМ: Who can use the neurostimulator?

T.G.: We recommend the device only to adult people. On the other hand, it is important to realize that neurostimulation is efficient and useful if a person has a specified purpose to be solved. For example, they study foreign language, prepare for competitions, write a report, and have to concentrate. At the same time, they try to combat the addiction, e.g. overeating or smoking. All these functions belong to certain head areas where electrodes should be attached to achieve the results.

ВСМ: What health indicators can be improved using brain stimulation?

Different areas of brain cortex are responsible for many functions. They include attentiveness, response speed, rapid complex decision-making, thinking outside the box, etc. In other words, there are a lot of cognitive aspects of our brain activity, which efficiency can be enhanced within stimulation. Thus, it is a biohacking process.

ВСМ: How safe is electric stimulation?

T.G.: TDCS electric stimulation is considered to be safer than nootropics pharmacological intervention. The healthcare sector, the initiator of the technology, applies TDCS to treat kids and pregnant women. Over several decades of its application, transcranial direct current stimulation has not caused such side effects that would do harm to people.

Well-known cases of any slight side effects are dizziness or burning sensation, and skin reactions. However, transcranial electric stimulation is considered to be one of the safest methods in neurobiology.

ВСМ: How many orders for brain stimulation devices have your already received? Are there any requests from a broad?

T.G.: As of today, several thousands of devices were ordered. Neurostimulators are constantly purchased on our website and in partner shops. They are bought by European and US citizens as well. The devices are primarily popular among the Russian audience. This is because our gadgets are currently accompanied only by the Russian guide. Therefore, Brainstorm Neurostimulators are frequently acquired abroad by people who have moved to foreign countries and who want to adapt in their language environment. Our gadgets help them to study foreign languages.

ВСМ: What are the plans of the Brainstorm Neurostimulator project for the next 2-3 years?

T.G.: We are implementing the grant by the Innovation Promotion Fund of the Russian Federation for the development of a sports transcranial electric stimulator, which will be based on TDCS technology and be more convenient during sports trainings. This device will be designed to stimulate motor brain cortex. It will be more expensive but more ergonomic.

Moreover, we are also working on bringing Brainstorm Neurostimulator to the foreign market in order to make our gadgets be available to foreign users as well.

ВСМ: You will take part in Biohacking Conference Moscow. What are you going to talk about at the event?

T.G.: I am going to talk about the current incredible neurobiological revolution and its relation to biohacking. I will also explain what functions can be advanced using neurobiology achievements for the past decades.

Ordinary healthy people can face numerous differences in their life. Many of them consume nootropics or, for instance, drink coffee to increase their productivity. Neurobiology is entering the social space with its new solutions to help people to enhance their performance. I will tell the audience what gadgets should be used for this purpose, how they function, and what benefits they give to people. We will discuss all above-mentioned issues at the conference.

On September 19, guests of Biohacking Conference Moscow will be able to test
Brainstorm Neurostimulator and to communicate with Timofey personally.