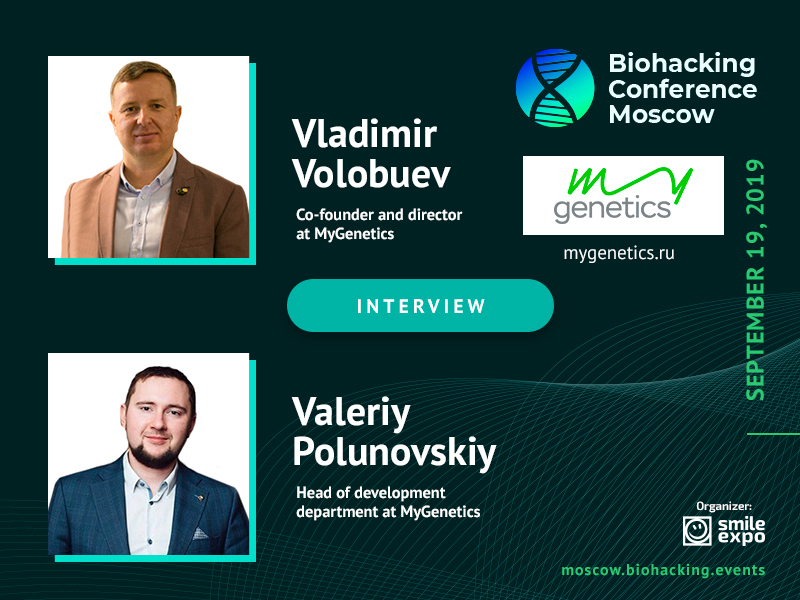 What genes affect the lifespan? What body features can be revealed using DNA analyses? What substances protect DNA from damaging factors? Why should one repeatedly pass genetic tests? These issues are described in an interview with representatives of MyGenetics, Vladimir Volobuev and Valeriy Polunovskiy.

Vladimir Volobuev is a technological entrepreneur, co-founder and CEO at MyGenetics. Valeriy Polunovskiy is a genetic scientist, molecular biologist, and Lead Developer at MyGenetics. Shortly before Biohacking Conference Moscow to be held on September 19, they told the event team about core products of MyGenetics, the impact of external factors on human genetics, and prospects of gene therapy.

ВСМ: How did you come up with the idea of founding a company aimed at developing and conducting DNA tests? Why did you take interest in this area?

V.V.: The idea of genetics business appeared in 2012. The project on human genome decoding was just completed back then. It was promising from the very beginning, causing the great euphoria in society. At the same time, the USA established a startup showing a heavy growth of consumer genetics. Its founder rapidly entered the cover of Times, and everyone started saying that the future belonged to genetics. These events laid the foundation for the concept that genetics was not only science, but also a potentially good business project capable to turn into a kind of global idea with the stronger sense, particularly the economical one.

Why DNA tests? It is a quite interesting sector: tiny DNA, which is actually still totally unexplored, can provide an enormous volume of useful and necessary information about a person. DNA test results are what many people strive for in order to know themselves better and seize body capabilities as much as possible.

ВСМ: Tell us about the process of passing genetic tests. How accurate are their results?

V.P.: The research procedure is quite simple. Clients order a DNA test on our website, and a courier delivers a kit for gathering DNA materials right to their home or office. To collect genetic materials, one should run special cotton probes included in the kit over the inner side of the cheek. Thus, the cotton cap contains epithelial cells allowing to extract DNA. This method does not require any specific conditions of procedure carrying and preparations. The only thing, it is forbidden to eat, smoke, and brush teeth two hours before the material intake.

The further process is only our work. We give the genetic material to the laboratory that analyzes it between two and four weeks. By the way, we conduct all the studies at our own clinical diagnostic laboratory called MyGenetics, while research is carried over using the Real Time PCR technique. Its accuracy is approximately 99.9%, and it depends on the amount and quality of DNA.

When the results are done, we prepare a personal DNA report for a customer with their explanation and recommendations.

ВСМ: What body features can be discovered using DNA research?

V.V.: In general, DNA research can provide plenty of various information: from the underlying risk for certain diseases to eye colors and origin. We focus on knowledge that can be used in everyday life: we examine genes associated with metabolic process features, food intolerance risks, vitamin requirements, body response to physical activity, and psychoemotional aspects.

Currently, we have four core products:

V.P.: Nowadays, we know some factors that have a negative impact on the initial DNA sequence. Primarily, it is referred to ionizing radiation and carcinogens. These terrible words, unfortunately, can be faced not only in space or at hazardous production site. For example, carcinogens are formed in fried foods and during combustion of tobacco smoke components, or can be found in polluted atmosphere. Entering the body (along with food, cigarette smoke, and even with air), they can turn into mutagens accumulating in the body and leading to the DNA damage.

On the other hand, products have a series of compounds that protect DNA from external and internal damaging factors. We are taking about antioxidants and their activators. If people live in highly polluted environment, smoke, or eat fried or poor-quality foods, they need to protect their body and DNA. They can take antioxidants as additives or obtain them from foodstuff. A lot of the above-mentioned matters are contained in bilberry, spinach, white cabbage, Brussels sprouts, cocoa, and green tea.

V.P.: Genetics determines the lifespan approximately by 15%, in other words, its contribution is not too great. However, certain genes strongly influence particular characteristics under specific conditions.

CHRNA5 gene is related to nicotine addiction. One polymorphism of this gene is aligned with the reduction of life nearly by 8 months, consequently two polymorphisms decrease life by about 1.5 years (if a person with such genetics smokes). In other words, certain conditions such as smoking and CHRNA5 polymorphism increase the risk that people with this genotype can live less. Therefore, they are definitely not allowed to smoke.

The next gene is APОE. It is attributed to atherosclerosis and Alzheimer disease, which affect the lifespan. This gene has a direct impact on how long and well the human heart and cardiovascular system will function. Moreover, it is tied to neurodegenerative diseases. It is able to reduce human life on average by 2 years given certain options.

There is a range of other genes, which are firstly related to cardiovascular diseases and secondly to autoimmune processes.

Currently, there is almost no gene capable to show a direct association between life duration and oncology diseases, which is strange but understandable. This is because oncology is increasingly explored in developed countries and, unlike Alzheimer disease or blood stroke, it highly depends on environmental effects (smoking, ecosystem). That is why genes involved with oncology do not have a statistically significant impact on the lifespan.

ВСМ: In 2017, biohacker Joshua Zeiner stated that he made an injection aimed at changing his genes. Do you think it is safe to introduce changes in human DNA? How promising is this technology?

V.P.: Actually, the possibility to change genes is a promising area. It is called gene therapy. When people suffer from some kind of disease, it is possible to activate, inactivate, or add a certain gene allowing to treat this illness. It is quite efficient for monogenic forms in general. If one indiscriminately changes genes of healthy people, it can result in new mutations and serious troubles, e.g. oncology. Introducing amendments in genes without doctor’s control and without proven technologies untested on model organisms is at least harmful and likely dangerous.

Genome editing on embryos is illegal. Nevertheless, a single episode happened in China. One took an egg cell of the HIV-infected mother and spermatozoa of the healthy father. Afterwards, the genome was edited in such a way that kids appeared to be absolutely tolerant to HIV. The mother made IVF (in vitro fertilization), got pregnant, and children were born resistant to HIV. But this issue was shut down. Whether it is good or bad is a question of bioethics. But the technology does exist. It will definitely advance in animals. As to its application among people, this matter is rather ethical than technological.

ВСМ: Does it make sense to repeatedly pass genetic research? Why?

V.P.: In fact, human genes do not change throughout life. Despite this, genetic examinations can be passed repeatedly for a variety of reasons. For instance, telomeres (chromosome end areas protecting DNA from degradation) can be investigated several times. Their length and size can vary. The shorter they are, the lesser the cell will live; the longer, the more.

Genes do not change on their own, but mutation can appear in some cells. For example, in cancer cells. Affected by mutation, they reinvent themselves. To identify the type of cancer cell, one can perform the genetic analysis to detect the group of cells and the situation. It will help to prepare an appropriate anticancer therapy.

Genetic research can be conducted repeatedly from the perspective of interpretation. It clearly alters with the emergence of new studies. Here is an obvious example. Earlier, cholesterol was the main enemy and the reason for cardiovascular diseases. That’s not true now. Systemic inflammation and cortisone became the greatest enemies. A term of good cholesterol was introduced.

New investigations emerge all the time and deny former paradigm bases. Obtaining tips is a quite variable thing. Genetics remains the same, but recommendations based on similar data can and should change, as science does not rest on its laurels.

ВСМ: What you will present at Biohacking Conference Moscow?

V.V.: We will present our most popular products and share information about new solutions. Specially for participants of Biohacking Conference Moscow, we have prepared a unique offer. DNA tests, MyWellness (tips for diet, sports, vitamin intake, and health) and MyBeauty (tips for preservation of skin and hair health, AntiАge), can be bought for only 12,900 RUB (instead of 17,900 RUB).

We will also show our new invention, especially relevant to biohackers: MyNeuro DNA test. It provides recommendations for improving productivity and resistance to stress, selecting an individual schedule of operations and brain relaxation based on DNA.