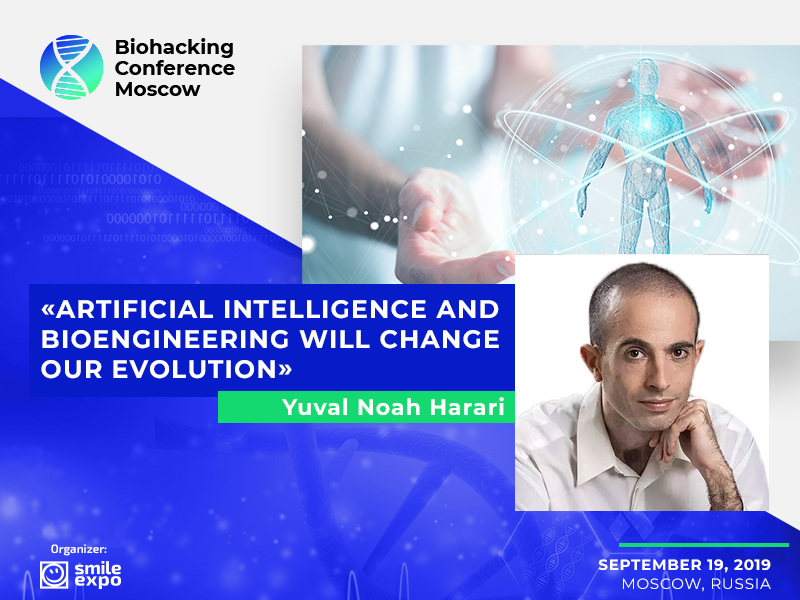 It is simply dangerous to believe in the existence of free will – believes the historian and writer from Israel Yuval Noah Harari, the author of the bestseller Sapiens: A Brief History of Humankind, where the history of humankind is reviewed from the perspective of natural sciences, for instance, evolutionary biology.

Professor Yuval Noah Harari is an Israeli military historian and medievalist that lectures at the Department of History at the Hebrew University of Jerusalem. According to the writer, his first book became a bestseller because people have an acute desire to understand the world in the era of globalism. Rethinking of the history from the global perspective, in the opinion of Harari, is necessary to understand what will be happening with us in the future.

A frequent guest of international conferences and interviews, Yuval Noah Harari actively takes part in the discussions about the future of humankind, the use of new technologies, and the consequences of the progress. Harari is an animal welfarist, vegan, practices meditation, and tries not to use the smartphone (which takes too much time and acts as a means of mind control, in his opinion). What interesting theories does the scientist suggest and how does he see the future of people?

Why is there no free will?

Yuval Harari believes that free will is a myth and making yourself believe the contrary is very dangerous, as such people are simple to manipulate. According to the historian, the most important thing is to understand that most of our strivings are not our wants; they are inflicted on us from outside. This happens because governments and corporations can learn more about us than we know about ourselves using modern technologies.

“People think that their choice at the supermarket or the polling station is the exercise of their free will, whereas, in fact, it is a growing possibility of corporations to crack your mind and manipulate you,” Yuval Harari states.

The idea of free will is naïve and it is incorrect to think that everything that comes to your mind is the expression of your free will. You need to assess your solutions from the standpoint of what could influence them, as the root of our choice does not come from our thoughts. Even the choice of flakes at the supermarket reflects our want that sprang from the seed of manipulations. For example, due to advertising on TV or the Internet.

“Manipulation principles are old, and technologies are new. One hundred years ago, most of the manipulations were made using statistical data. Today for the first time ever, some corporations and governments are getting technologies that allow them to monitor each and every citizen at any time and really understand what is happening in their body and brain,” the scientist says.

Yuval Harari states that one can influence decisions, opinions, and thoughts of people most efficiently using three things:

Today people have access to knowledge and computers to process big data arrays. Earlier, the lack of these things posed huge restrictions, and now there is enough knowledge and technical capabilities to analyze everyone, to address everyone in person. Harari compares this with the pointed gun in the hands of corporations and governmental agencies (for example, surveillance capitalism in the USA, and people tracked by the government in China).

How humanity will change: Harari about the future

Artificial intelligence and bioengineeringwill change our evolution, believes the Israeli scientist. It will be the largest revolution in the history that will not only influence the economy and politics but also change people, their bodies, brains, and DNA thanks to new technologies. Yuval Harari admits the possibility that the way we think and feel will change.

In his opinion, man as a species may experience fundamental changes according to three scenarios.

The historian does not consider this a fully-fledged threat to the existence of the man as a species, as “once Homo erectuswas replaced by Homo sapiens, but we do not consider this as the elimination of Homo erectusbut as the advancement”. On the other hand, the development of artificial intelligence and bioengineering, in the opinion of Harari, may become a problem if the process is not controlled at the global level.

Global problems of the 21 century

Theoretically, there will be a possibility to replace anything in the future – limbs, organs, heart, and even brain. This can start as treatment and end as the improvement of the body. The main difficulty is what humanity will be doing with the new technologies: will they be helping all people or making a special group of people better as compared to others.

“The biggest threat is the appearance of a useless class. The class of people that are not exploited, not needed. In the 20 century, the main struggle was against the exploitation, and now uselessnessis a problem. It is worse. It is very difficult to struggle if you are not needed,” Yuval Harari explains.

In his opinion, this problem can be solved if people are provided with the possibility to obtain new skills and education. Among other things, the scientist distinguishes three main problems:

Absolute trust at the global level is required to solve these problems. For example in issues of genetic engineering, restrictions should be introduced in all countries at the same time, otherwise, this is useless. Climate changes also differently affect different countries, for example when it comes to global warming, and this significantly complicates communication and the possibility to come to an agreement.

Information – the most valuable asset of modern time

According to Yuval Harari, the modern world experiences the race for human attention. It is encouraged by the development of the Internet and technologies. Without thinking, people give their personal data in exchange for services or for nothing. The historian thinks that the principle of such an exchange is very bad, as personal data is the most valuable asset of the man, and companies sell information to corporations and governments.

Using technologies, one can find out even those things that the person hides from himself – by watching people through cameras, reading their facial expressions, visual direction. Health sensors are also used to not only diagnose but also read emotions, track the person’s reactions.

Professor Yuval Noah Harari believes that free will as an integral notion does not exist and our choices are always influenced from outside. It is important to be aware of it and critically evaluate what external factors define our wants as well as understand where it may lead. In the opinion of the scientist, technologies themselves are neutral, and the question is how humanity will be using them. It will shape whether the progress will bring harm or benefits in the future.